If brandy was made out of sparrows there would soon be no sparrows.
–GCL, J.22

At first I thought I was going to have to make something up, but then I remembered: Café Uxmal!

Back in the day, every year after GHP, my adorable bride and I would go on vacation.  Since her perception of my time in Valdosta was that it was one long party—and certainly 20 years ago I was partying more than I am now—she felt entitled to a hella vacation when I got home.  The fact that I had actually been working from 6 a.m. to 10 p.m. every day for six weeks and would really like to relax carried no weight in our decision.

My bride—being of an excitable, not to say distractible, nature—defined “vacation” as the process of going and doing as much as humanly possible in the most jampacked place you could think of. In 1985, it was Washington, DC.  In 1986, it was New York City.  And finally, trying to get to somewhere on time in the heat of August and noise of Times Square, I snapped.

Today, of course, I am possessed of a serene equanimity that permits me to endure such nerve-wracking experiences without breaking a sweat.  I have even been to Walt Disney World during spring break and did not flinch.  Part of that is due to the wisdom of age, but I must say that part of my survival kit is what I learned in the summer of 1987: too many people around you?  Put yourself alone on that white, white beach, and listen to the waves.  Ahhh.

But back in Times Square, 1986, I snapped.  “Next year,” I said, “we go to a beach, and we do nothing.  We’re going to relax.”  My partner looked dubious, even scornful, but, probably recognizing that I was not going to be much fun otherwise, she accepted my pronouncement.

I should have known better.  I was thinking St. Simon’s, the Gulf Coast, Daytona even.  My lovely first wife, in the meantime and on the other hand, settled on Cancun: passports, international flights, ancient ruins in inaccessible jungles, tawny cabana youths in crisp white shirts, excitement in every way.

It actually wasn’t bad, of course.  The beaches were glorious, the tequila was never-ending, and if you’ll pardon my saying so, the congress was splendid and nonstop.  I wore a Speedo for the first and only time in my life, and of course would have worn less had I been able.  The ruins were inspiring: do not take a day trip, fork over the bucks for an overnight at the Club Med.  I drank margaritas to excess on the trip out to Isla Mujeres, such that while other daytrippers were jumping overboard into the warm sea on the way back, I was puking my guts out in the head.  It was the best of vacations for the both of us.

Our last night in Cancun, we walked away from the bright lights of the main tourist area and explored the edges of downtown, looking for a restaurant that didn’t have hamburgers on its menu for unacclimatized gringos.  We found the Café Uxmal.

I forget what I had as my meal, but after dinner we were offered coffee, and I decided to go for the eponymous house specialty, Caf´Uxmal.  It was a grandiose production: strong Mayan coffee to which was added, in succession, Kahlua, brandy, and Xtabentún, each poured flaming from cup to cup before being added to the coffee.  Finally, it was topped with ice cream, and I was in heaven.

Here’s a similar production, a little flashier, but also apparently flaming all the liqueurs at once:

After a glass of that, we wandered back to the hotel, then out to the beach, where I will discreetly fade to black on the luxuriant summer evening.

In writing this, I remember that we actually brought a bottle of Xtabentún back with us from Cancun twenty-two years ago.  We actually never made the coffee, I don’t think.  There certainly doesn’t seem to be much missing from the bottle, which has sat at the back of my liquor cabinet since 1987.  I pour a little into a shot glass and taste it, and I wonder why in the hell it has not been my apertif of choice for half of my life now.

It is a pale yellow-green, a little paler than Rose’s lime juice.  It coats the sides of the glass.  The bottle says licor de anis dulce con miel de abejas, and it is one of the most delicious drinks I have ever had.  I’m taking another sip. 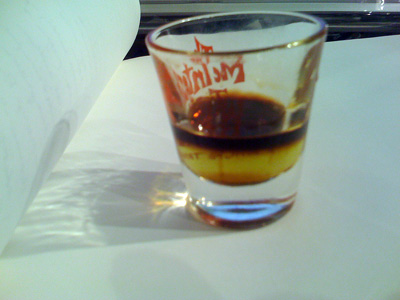 When added, Kahlúa floats on top of it in a nice miniature pousse café.  Consumed together, they make me forget my dietary forbearance of weekday alcohol.  Yes, I think I will have another.

What is this stuff?  Thank goodness for the internet.  I’ve assumed for twenty years that it was some kind of cheesy Mexican absinthe ripoff, but I was wrong.  I actually am in possession of a rare commodity, it seems.  The honey predominates, with a smooth, sweet anise finish that lingers not unpleasantly.  Goodness, it’s tasty.

Let me put it this way: before I share this bottle with anyone else, I have to make sure there’s a ready supply somewhere within my grasp.  One more, to celebrate this delightful Lichtenbergian Assignment, the first of our new year together.  I love you guys!

Now let me see if I can figure out how to get this memoir from my word processor over to this internet thingie over here.