Today is Joseph Campbell’s birthday.Â  That is all.

Oh, wait, that is not all.Â  It is also the birthday of A.E. Housman, Tennessee Williams, and Robert Frost.Â  That is all.

I was thinking that these guys might be Lichtenbergian, but two things give me pause: 1) we, for all our frivolity, never set out to be inadequate; we do care about the quality of our work.Â  And 2) these guys have actually put together a world-renowned (of sorts) orchestra.Â  I don’t think we’ve done anything like that.

The aphorisms of GCL

It is finished. I have read through my little paperback edition of The Waste Books of Georg Christoph Lichtenberg and put a star next to all those which I think would be pertinent to our Society. (I will admit that the longer and probably more philosophical entries I did not check and barely read.)

I have put them into the Quote Rotator, and so now you can be as amazed as I have been at their polish, their wit, their just plain applicability to us and the world we live in. I’ve set the Rotator to change the quote every 60 seconds so that you have plenty of time to savor each one. If you want an immediate change, hit reload nike air max pas cher.

It would be interesting to hear everyone’s reactions to these nuggets of wisdom. Which are your favorite, which inspire you, which are all too horribly close to the truth? or post or something.

If you find a typo in one, please let me know.Â  It’s easiest for me if you give me the “waste code,” i.e., the waste book letter and the aphorism number: F.42 or whatever.

Interestingly, there are 404 selections. In internet speech, of course, that’s the code for Page Not Found. Make of that what you will. 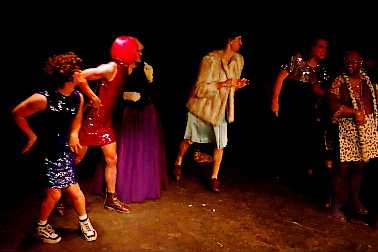 The haute monde was still reeling Tuesday night after the revelation that a woman it had taken as one of its own was not in fact an elegant Saudi princess but an ordinary, if talented, elementary media specialist from Georgia.

Tamara Pinchme, the American-born wife of Saudi royal Khalid bin Sultan, champion of womenâ€™s rights and Bedouin literacy, whose thrilling life story ranged from Hyannisport to Andy Warholâ€™s Factory to the execution chambers of Riyadh, was revealed Monday morning to be Dale Lyles, a 53-year-old husband and father from Newnan, Georgia.

â€œI have to give this to him,â€ said Donald Trump, speaking from his office in Columbus Circle, â€œhe had me completely fooled. I was ready to marry him.â€

After a summer of living it up with the glitterati of Manhattan, Pinchmeâ€™s cover was blown after the actual Tamara Pinchme, avant-garde novelist from the 1960s, contacted the Times over the weekend. The real Pinchme had been alerted to her doppelgÃ¤ngerâ€™s existence when friends forwarded her web reports of the glamorous princessâ€™s conquests of high society.

â€œWeâ€™re as shocked as anyone,â€ said Kitty deBourgh, spokesperson for Grove Press, when contacted about the story. â€œHer life story was deeply compelling and spoke to all of us here at Grove Press. Of course, all we ever saw was the burqa.â€

Indeed, Princess Pinchmeâ€™s life story was deeply compelling. She came to the attention of New Yorkâ€™s elite after meeting William F. Buckley in the Oak Room at the Algonquin Hotel. Dressed in her trademark red silk burqa, she struck up a conversation with the conservative Brahmin. Before his death he described her voice as â€œever soft, gentle, and lowâ€”an excellent thing in woman.â€

Invitations to soirees and salons were quick to come, and Pinchme fascinated all who met her with the events of her life. In broad outline, Pinchme emerged from Vassar, having been the roommate of Jacqueline Bouvier, and then moved to New York City, where she became the social secretary (and some said lover) of Andy Warhol.

According to several prominent socialites interviewed for this article, it was at The Factory that she met her future husband, the Saudi prince Khalid bin Sultan. She noted that the two did not hit it off immediately, although they slept together the entire first week they knew each other. It was not until they met again, she said, at the Lucerne Film Festival that they knew they were destined for each other.

It was not a marriage made in heaven, she claimed. Almost immediately her free spirits came acropper against the conservative Saudi social structure. She claimed that she repeatedly was nearly beheaded for her stances for womenâ€™s rights. â€œI think they were bluffing each time,â€ she said. â€œThey knew that my profile was too high to kill me.â€

According to Pinchme, the marriage produced five children, but was not a happy one in the end. Claiming abuse from her husband, she fled Saudi Arabia last spring to return to the United States, leaving her children behind.

She also claimed to have championed literacy programs for Bedouin children, instituting â€œBook Camelsâ€ as mobile libraries in the deserts of Arabia. It was this project that attracted the many donations from her newfound friends in the penthouses of Fifth Avenue.bottes ugg pas cher bottes ugg pas cher

Seemingly, none of it was true. The Saudi princess was actually a man, one Dale Lyles from Newnan, Georgia. When contacted by this newspaper on Monday morning, Lyles admitted the deception, which he says got started when he came to New York City on his spring break to do some research for a novel he said he was writing about such a woman.

â€œA long time ago I did know a woman who was married to a son of the Shah of Iran. She had fled the country after being heavily abused by him. She left her children behind,â€ said Lyles. â€œMy intent in dressing in the burqa was to gain some insight on how such a woman might be perceived in todayâ€™s society as background for my novel. When I met Bill Buckley, I just began to improvise, and it got out of hand. I deeply regret the subterfuge.â€

It was not clear at presstime whether charges of fraud against Lyles are pending.

If you haven’t already, go read this post on my blog.

The assignment is to create a separate post for this New York Times story about your tragic exposure as a fraud.

To create a separate post, click on the Site Admin link in the Meta menu. (Whenever you log in, click on the “Remember me” box and you’ll always be logged in when you come here on that computer.) Then click on the Write tab at the top of the Admin page, and start writing. Remember to click the Assignments category, and the L.08.3 category.

To pick up with a thread of thought from elsewhere, here”s today”s spam subject line:

Get any soft you need without delays.

Here’s an idea that I had that I will never play with, so feel free to take it. (Hence the newly renamed category Waste.)

I was playing school one day and showing kids what Manhattan looked like so they could better describe Piet Mondrian’s Broadway Boogie-Woogie, and I fell to musing about the nature of the grid of avenues and streets.C4090-454

Mostly I mused about how we never seem to have caught on to the idea in all the development going on around here.

So, I mused, what would Manhattan look like if it had been developed by the developers of SummerGrove? I posited laying out a patchwork of dead-end streets overlayed on the grid, an exurban hell where now exists the world’s greatest city.

I played with it for a few minutes, even developed the map at left in PhotoShop, but completing it was just not in my schedule.

I think it would be a great conceptual piece. Feel free to steal it.C4090-453

An appropriately Lichtenbergian seven weeks after the domain name of lichtenbergian.org went live, we finally have our official website open for business.

All of you should have received an email with your username and password. If not, email me.